We recently had the pleasure of delivering a Pioneer “Tribute” system to the studio of Steve Everitt, an accomplished professional composer and musician. Steve has been a regular contributor to ‘Eat Static’ – an eclectic electronic band headed by Merv Pepler. Taking along another Pioneer “Tribute” system and combining it with Steve’s Aviator meant there was a total of 5 complete Exclusively Analogue synth lines.

Tony commented – “Whilst I have the technical ability to produce the equipment, I sadly lack the musical talent to be able to produce anything remotely appealing. In contrast Steve has talent by the bucket load, which was proven within the first 30 minutes of my being there when he added a sound from his new Pioneer system into a beautiful piano led piece he was working on. The piece already had Steve’s Aviator in the mix and the end result was a magical combination of traditional instruments; Steinway piano, orchestral strings and various electronic ‘textures’ to produce the final result.”

The rest of the day was spent experimenting with the two modular systems and creating a variety of interesting sounds which, even in fairly simple sequences, sounded good. Seeing and hearing the equipment being used by a professional was a very rewarding experience. 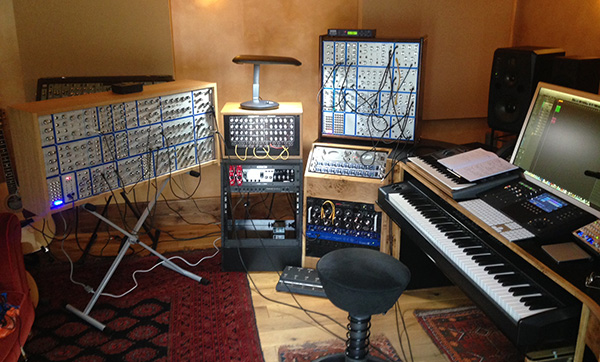 Merv Pepler joined later in the day, primarily so he could see the two Tribute systems together. Merv was very familiar with the Aviator, having recorded Steve’s on a number of albums in the past and as a result is considering, like Steve, stepping into the modular world. Merv was definitely impressed with the Tribute system and it is likely that he will have the very last system as well as one of the last Aviators. Interestingly, both Steve and Merv have been considering adding some of the more popular ‘Eurorack’ size modules to their collection however both seemed to prefer the larger format of the Emu design.

The advantage of the Eurorack equipment is that you can cram a lot into a small space which is ideally suited to the ‘bedroom musicians’. Lots of people spend time on modulars creating new and interesting sounds and Steve made the comment that he was concerned he would spend too much time ‘wiggling’ and not making music. With Steve and Merv I know that any analogue equipment they have will be used to create music which is, after all, what any musical instrument is for – not solely as a piece of furniture.