Home/Exclusively Analogue, The Pioneer/Synth Apps on a phone vs The Real Thing and a new Universal Active Filter
Previous Next

It’s been a while since my last blog mainly because my ‘day job’ of flying an airliner has kept me very busy recently.

I, like so many people Worldwide, have joined the ‘Apple’ family and ended up with an iPhone and an iPad. One of the interesting things I noticed was a number of Apps (Applications) that you can get for musicians including some quite good analogue synthesizer ones. There is a very good app from Korg, that recreates the famous MS20 synthesizer, and another from Akai. Both allow you to recreate some very realistic analogue synth sounds on your iPhone/iPad. The downside however is the lack of tactility that you get from the ‘real thing’ and you are left trying to get used to finger movements on the screen and that takes time to master. It’s so much easier to just tweak a knob or switch on the real thing!!

No one has so far created an Emu Modular or Aviator app but judging by the apps I have looked at I’m sure it could be done. However, owning the real thing with the original sound and controls is, in my opinion, far better than a digital recreation. You could liken it to the difference between driving a high performance sports car in a computer game and owning the real thing. One of the main reasons is that any digital recreation with ‘analogue modelling’ can only go so far at producing the same filter characteristics. For instance the Emu Universal Active Filter (UAF) has a lot of discrete components (i.e. dual matched transistors) in it that help give it the range of filtering options available and the unique sound 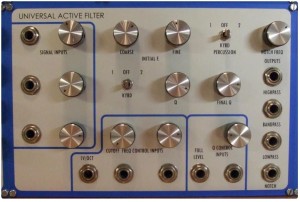 I have been doing some experimentation and detective work recently with the primary aim of trying to find some alternatives for the AD820 and LM114 dual matched transistors used in the Emu UAF module. Fortunately I have now found alternatives from Linear Systems that match the characteristics of the originals so I can now build more Universal Active Filters if anyone wants them. I have done all of the work ready to produce new main and sub module circuit boards as well having the front panels already made.

The Universal Active Filter will be the first module that can be purchased separately so it can be added to existing Emu Modular systems or even to other modulars provided a suitable power source is available. Further details will be on the website shortly but if you are interested in getting a UAF just send us an email. 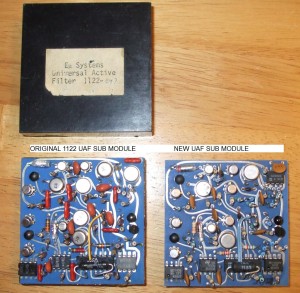 The picture above shows an original UAF sub module and a new one that I completed recently. In a side by side test the sound you get is identical!!