Two Emu Modulars In Use – The Analogue Monster

Home/Exclusively Analogue, The Pioneer/Two Emu Modulars In Use – The Analogue Monster
Previous Next

Two Emu Modulars In Use – The Analogue Monster

At the end of 2013 Tony decided to build a special 24″ by 24″ “Square” Pioneer ‘Tribute’ system similar to the original Emu modular that he had in 1994. The modules have been built into a Maple wood cabinet and have been set up as two complete synthesizer lines including 5 VCOs, 3 different Voltage Controlled Filters, 2 Dual Transient Generators, 2 Voltage Controlled Amplifiers plus a few other useful modules. The picture below shows two modular systems together. 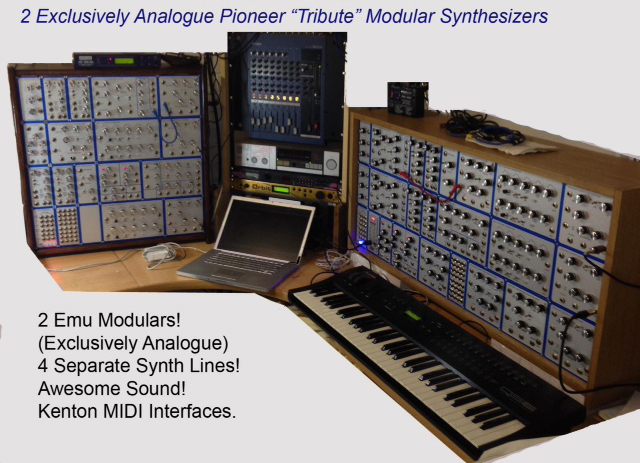 The two systems provide 4 separate analogue synth lines controlled by various Kenton MIDI/CV convertors. Using the MIDI files of some well-known pieces of music Tony had the basis to experiment with different sounds. As an example, he used 1 line for the bass, 2 lines as sequences and the final line as a lead with an added drum track from a MacBook Pro. The MacBook Pro, running Logic Pro, was also able to control everything via a MIDI interface.

So what sort of sounds can be created with 2 Emu Modulars? Well just about any classic analogue sound because both systems have Universal Active Filters and MultiMode filters to compliment the usual 24dB Low Pass Filter meaning the more interesting High Pass Filter ‘buzzy’ sounds are available. Tony is a fan of a slow sweeping HPF with resonance as an effect if you can get the slow sweep to work in time with the music. Another nice effect is having the filter frequency shift in time with the music to create a rhythmic pattern similar to adding an accent on certain notes, say every 4th note in a 1/16th note sequence. He’s done this previously using analogue sequencers but in this latest set up I used the aux outputs from the Kenton interfaces to provide the additional voltage to change the Filter cutoff.

The original plan was that the new “Square” system would be sold and it has therefore been advertised on eBay. However, like every one of the Tribute systems built so far, this one has been ‘lovingly’ hand crafted to a very high standard and as a result is one of a kind. If you are interested in purchasing this system for your studio or setup please get in touch.